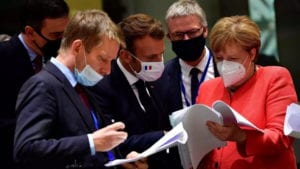 (New York, N.Y.) – Leaders of the European Union (EU) last week received an unprecedented letter from 235 lawmakers representing 30 nations and 25 EU member states, urging the body to ban Iran’s Lebanese proxy Hezbollah and designate it in its entirety as a terrorist group. The letter, known as the Transatlantic Declaration on Hezbollah, was sent to Brussels ahead of the July 18 anniversary of the 1994 bombing of the AMIA Jewish Cultural Center in Buenos Aires and the 2012 bombing of a passenger bus carrying Israeli tourists at the Burgas Airport in Bulgaria. Hezbollah was linked to both terrorist attacks.

Currently, the EU has outlawed only Hezbollah’s so-called military wing, drawing a distinction with the group’s political wing—a fiction denied by Hezbollah. Of its member states, Germany recognized Hezbollah as a single entity in April, joining the Netherlands. The United Kingdom also designated Hezbollah in March 2019.

According to German intelligence reports from July 2019, there are approximately 1,050 Hezbollah supporters and 30 mosques and centers linked to the group in the country. Immediately after Berlin’s move against the organization, German authorities raided properties throughout the country, including the Al-Mustafa Community Center in Bremen, detaining several suspects accused of providing financial and propaganda support to the terrorist group. German authorities have accused 50 members of Al-Mustafa of providing “financial support” to Hezbollah by sending funds to Lebanese families of deceased Hezbollah fighters.

Ahead of the EU’s designation of Hezbollah’s military wing in 2012, Europe’s leaders were divided over the label out of fear of complicating their relationships with Lebanon. Lebanon’s government and armed forces have long been compromised by Hezbollah. But no such complication emerged, nor has the United States, Germany, the Netherlands, the United Kingdom, the Gulf Cooperation Council, or the Arab League suffered in their relations with Beirut by recognizing Hezbollah as a single terrorist entity.